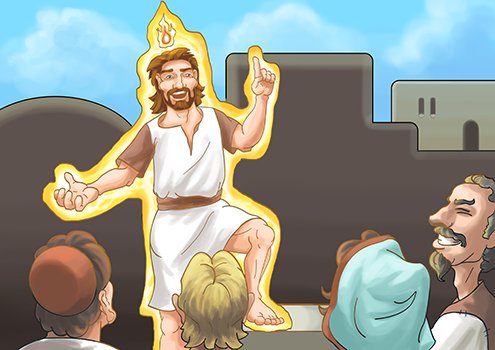 One of the most colorful personalities in the Bible is Simon Bar-Jona, known today as Peter the apostle. A rugged fisherman, he was always bursting with energy and action.

During his years under Christ's personal leadership and teaching, Peter often bulldozed his way around. By far the most outspoken of the twelve apostles, Peter always seemed to say what was on his mind. More often than not, relying on his own self-confidence hindered him and caused him to make mistakes.

However, after following Jesus for three full years, Peter underwent a dramatic change—and this story is about that transformation. We begin at the closing hours of Jesus' ministry on earth, at the last supper, which He ate with His disciples only a few hours before His arrest and crucifixion.

Knowing that He would soon suffer death for the sins of the world, Jesus looked around at His disciples and said, “You shall all be offended and shall leave Me this night: For it is written, 'I will smite the Shepherd, and the sheep of the flock shall be scattered.'“[1]

Upon hearing this, and overestimating himself, Peter boldly proclaimed, “Though all men desert You, yet I will not!”

“I say to you that before the cock crows, you will have denied Me three times,”[2] Jesus quietly answered.

Peter insisted, “Lord, I am ready to go with You, both into prison and to death!”[3]

Nevertheless, that very night, as Jesus was in the Garden of Gethsemane with His disciples, a band of temple guards sent by the chief priests and elders came with a multitude carrying swords, clubs, and torches. They seized Jesus, but all His disciples, filled with fear, fled.

As the guards took Jesus away to the palace of the high priest, Peter, trying to gather his courage, followed Him afar off. Arriving at the palace, Peter stood by the door, hoping to observe the court proceedings from a distance. A woman at the palace door noticed the distraught figure, and looking suspiciously at Peter, asked, “Aren't you one of this man's disciples?”

“No! I'm not!” he said, and moved to where others were warming themselves by a fire which the night guards had made.

“This fellow was also with Jesus of Nazareth,” another woman declared to the men who stood by, “He is one of them!”

But Peter swore to them, “I do not know the man!”

Suddenly, a man who had been present at Jesus’ capture pointed Peter out and loudly questioned him, “Didn't I see you in the Garden of Gethsemane with Him?” Others who stood in the crowd joined in the allegation, saying, “Surely you are one of them! We can tell by your accent that you're a Galilean!”

In response, Peter began to curse and to swear, insisting that he did not know what they were talking about, and that he knew nothing about the man.[4]

No sooner had he finished his denial than the cock began to crow. Jesus, as His captors led him to another part of the palace, turned and looked at Peter. Immediately Peter recalled his Master’s words, “Before the cock crows, you will have denied Me three times.”

Realizing what he had done, Peter stumbled for the door, ran blindly into the night, and there in a deserted alley beneath the walls of Jerusalem, he sank to the ground and wept bitterly.[5]

Fortunately, our story does not end in defeat. Three days after His trial and crucifixion, Jesus victoriously arose from the dead! His disciples, meanwhile, were huddled in a small room, hidden away. Jesus knew of their hiding place, of course, and appeared to them, and for the next 40 days, He often visited and walked with His disciples, encouraging them and explaining what He would have them do once He was gone. On the fortieth day, just before ascending into heaven, He told the disciples to return to Jerusalem, saying, “Wait for the promise of the Father, until you are strengthened with power from on high. For you shall receive power after the Holy Spirit comes upon you, and you shall be My witnesses.”[6]

The apostles returned to Jerusalem, and with well over 120 other disciples, along with their women and children, they waited and prayed together in an upper room in obedience to Jesus' final command before His departure.

Ten days later, a sound like the rushing of a mighty wind filled the house and they saw the appearance of many tongues of fire resting above each of their heads. Then they all were filled with the Holy Spirit and began to speak in other tongues as the Spirit moved them.[7]

This was what they'd been waiting for, God’s supernatural strength to enable them to continue Jesus’ work now that He had departed. Peter, his heart and life transformed by the Holy Spirit of God, was to lead the disciples in one of the most phenomenal witnessing adventures recorded in the New Testament.

At that time, visitors from many foreign nations had come to Jerusalem for the great annual celebration of the Jewish Feast of the Harvest. When Peter stepped into the streets with those 120 disciples—now filled with the Holy Spirit—they all began to speak in the languages of the multitudes visiting Jerusalem that day, yet the disciples had not learned how to speak those languages. The disciples testified to the crowds about the wonderful news of God's love in Jesus and His message of salvation.

Then Peter leaped up onto the steps of a nearby building, raised his hands, and shouted, bringing a hush over the enormous crowd. He spoke to them with such authority that an astounding 3,000 people were not only saved but also committed themselves that day to follow God as disciples.

Peter had changed. Here was a man who had acted so cowardly after Jesus’ arrest that he had denied Him three times, now standing before thousands in the very city where Jesus had been crucified, fearlessly proclaiming God's message. What caused this transformation? The power and might of the Holy Spirit. As the Lord had promised, they had received power after the Holy Spirit had come upon them.

Peter had gone through a severe testing when he denied Jesus, but there was no time for remorse. An explosion of witnessing and winning others into God's kingdom was underway, and God was using him in ways that Peter had never dreamed would be possible. He had once been so impulsive, always seeming to say the wrong things at the wrong times, but now he was strengthening his brethren, just as Jesus had prayed he would.[8]

The disciples were overjoyed to see God working so many miracles through them. Even though they had all forsaken Jesus in His most desperate hour, they knew that Jesus still loved them, and now they experienced a strengthening of faith that even surpassed those days when Jesus had walked among them.

Yet it seemed that Jesus was no longer gone, but was closer than ever. They remembered the words He'd spoken to them: “It is necessary that I go away, for if I go not away, the Comforter, which is the Holy Spirit, will not come unto you. Right now, the Spirit lives with you, but then He shall be in you! And he that believes in Me, the works that I do shall he do also. And greater works than these shall you do, because I go to My Father!”[9]

Not long after that day of winning over 3,000 new converts, Peter and John, right in front of an astounded multitude, instantly healed a man who was lame from birth. When Peter addressed the crowd, 5,000 more joined ranks with the disciples, increasing their number to over 8,000 men, not counting women and children. Truly, these were the “greater works” Jesus had spoken of. How was this possible? Jesus was no longer merely with them—but His power, teachings, and wisdom was in them by way of the Holy Ghost.

In the following days, Peter and John faced a wave of persecution from the same religious leaders who had crucified their Savior. But this time there was no fear, cowardice, or denial. Peter stood before their councils testifying with such courage and authority of the Spirit that the Bible says, “When they saw the boldness of Peter and John and perceived that they were uneducated and ignorant men, they marveled and knew that they had been with Jesus.”[10]

Why did the people marvel? Because they saw the same power in them that Jesus had when He walked the earth.

Adapted from Treasures © 1987. Read by Jeremy. Illustration by Yoko and Yasushi.
A My Wonder Studio Production. Copyright © 2014 by The Family International.