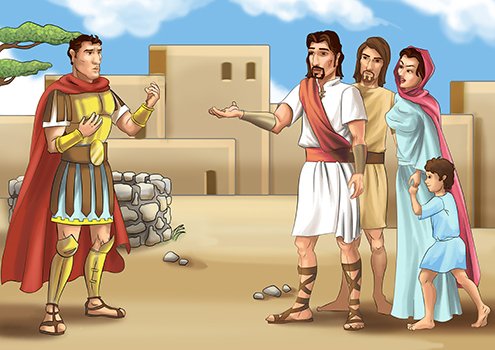 In the city of Capernaum in Israel, there lived a Roman centurion responsible for a garrison of a hundred soldiers. He and his men had kept watch on Jesus’ activities ever since He began His work in the city, for it was their duty to ensure that the Galilean was not doing or saying anything to incite a rebellion against Rome.

After hearing Jesus preach, however, the centurion had come to respect Him, realizing that the kingdom He proclaimed was hardly a threat to Rome, which in spite of all its power and greatness could stand to benefit from His teachings on love.

One day, the centurion’s beloved servant became grievously sick with palsy, and the centurion immediately thought of all Jesus had done for the sick.

Could He heal my servant? he wondered.

Nonetheless, how could he, being a Roman, approach a Jew for help in a day when most Jews despised the armies of Caesar? Would Jesus, known for His compassion, be willing to reach beyond His own Jewish race, even to help someone with whom the Jews were at odds?

“Surely I can call some of the Jewish elders,” the centurion reasoned, “respected men with whom I’ve had dealings, and they can talk to Jesus for me.”

These Jewish elders, who were indebted to the centurion for a favor he had shown to their people, told Jesus of the centurion’s request for the healing of his servant.

“This man is truly worthy of Your help,” they said. “He loves our nation and has even personally financed the building of our synagogue.”

Jesus agreed to go, but when He was not far from the centurion’s house, the centurion sent a message voicing his respect for the power Jesus had shown through the many miracles He had performed.

“Lord, do not trouble Yourself, for I am not worthy to have You come under my roof,” he said. “Just say the word and my servant will be healed. For I am a man in authority with soldiers under my command, and I say to one, ‘Go,’ and he goes, and to another, ‘Come,’ and he comes. And if I tell my servant, ‘Do this,’ then he does it.”

When Jesus heard these words, He marveled, and declared to those who followed Him, “I have not found such great faith, no, not in all Israel!”

Then Jesus, pleased with the centurion’s faith, said, “Go! It will be done just as you believed it would.”

The Bible tells us that at the very same moment that Jesus commended the centurion for his great faith, his servant was healed.

Imagine him finding his servant overjoyed and completely healed, and telling him that he can thank God through Jesus of Nazareth who did the miracle!

Such things still happen today to those who believe that God means what He says. God is working as powerfully as ever among those who trust in Him. He says, “I am the Lord, I change not!”[1] And “Jesus Christ, the same yesterday, today and forever.”[2] “If you believe, all things are possible to him that believes!”[3]

Adapted from Treasures © 1987. Read by Jeremy. Illustration by Yoko and Yasushi.
A My Wonder Studio Production. Copyright © 2014 by The Family International.