Christmas morning and another birthday, thought Max. He knew he had made the right decision to go to Olive Grove Retirement Home that morning, but he still wished a tiny something would happen for him after all. Even just making up with AJ would make my day. …

But there wasn’t much time for thought—after a quick “Happy Birthday, Max” song, and Merry Christmas-ing over the breakfast table, Mother announced that everyone absolutely had to be in the car at 10:30AM sharp! And that Christmas presents—and birthday presents—would be opened when they returned home.

Is it just me, or does the receptionist look a lot like Princess Leia from Star Wars? Max and family had arrived at Olive Grove and were in the lobby. The receptionist was wearing a white robe, and had her hair parted in the middle with huge buns on either side of her head—quite a different getup than the pale blue shirts the staff usually wore.

Wait! Is that a Wookie coming round the corner? With a Santa hat on? Max glanced at his Mom and Dad to see how they were taking this strange warp in reality. They were both looking studiously in another direction, but then the Wookie was coming straight for Max.

And then the Wookie lifted his head off, and the smiling face of Mr. Padraic appeared. “Happy Birthday, Max!”

That was the cue, as at that prompt, the lobby burst into a galaxy of alien visitors: Jedi Masters, shiny robotic looking people, and many Princess Leia wigs, (and was that a clown?) all singing “Happy Birthday to you.” In the corner Max noticed that his “Max”-mas tree had been brought to the lobby and had presents piled high under its low branches.

“It started as Mr. Padraic’s idea, and he called us with the plan just two days ago, and then AJ got in on it, and we all wanted to do something special for you.”

At this AJ appeared at Max’s side. “Wow, you look good,” said Max, taking in AJ’s Luke Skywalker outfit.

“I brought one for you too,” said AJ, smiling a bit, and then he said, “I’m sorry for the other day.…” But Max was saying the same thing. They both grinned at the other.

“Look what Mr. Padraic made!” said Jones, coming up to AJ and Max, holding up two LED flashlights turned into plastic laser guns. “This is the best birthday party ever!”

Max turned to Mr. Padraic. “Y-you did all this for me?”

"Not just me. Your mom and dad, and Noah too. And Sophie baked you a blue cake. And AJ called your classmates. When we heard you and your family would be joining us for our Christmas party, well, everyone wanted in on the fun!”

"But I thought you all hated me.…”

"Oh, please," said Sophie. "You were just terrible to be around when all you could talk about was … well … you know."

“We know,” said Mother, “And we’re all more touched than words can say. We should have told you that we were going to make sure you were going to have the best birthday ever… because, of course we weren’t going to let you have anything less. But you were so determined to do everything yourself.…”

“I was quite a bear,” said Max, and he felt good saying it. He knew his family would have to forgive him, it was Christmas Day—and his birthday too.

“Were you ever!” agreed AJ, and everyone laughed. 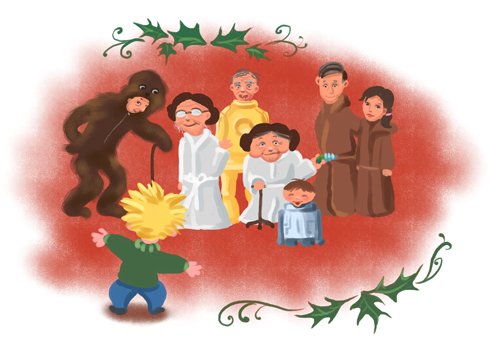 Reginald’s Diary, December 25th, 2011
Gotta be quick, since Dad wants to construct our very own snow slide in the backyard. Just thought to make a note for myself for next year so I won’t forget—the trouble with Christmas didn’t turn out to be trouble after all.

Authored by R. A. Watterson. Illustration by Yoko Matsuoka.
Copyright © 2011 by The Family International