The Trouble with Christmas 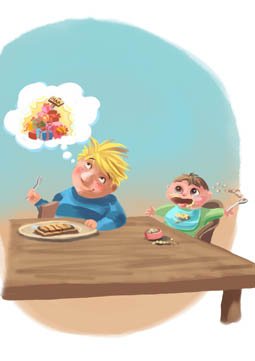 The trouble with Christmas, thought Max, is that I was born on Christmas Day.

It was the first day of December, and the delicious smells of cinnamon French toast and crisp bacon filled the warm kitchen. The Talley household had gathered for their yearly first-day-of-Christmas breakfast, and as Father read the Christmas story from the book of Matthew, Maximilian Talley’s mind wandered as he thought about his ill-fated luck at being born on Christmas Day, and how it meant that every year he had the misfortune of his birthday party being combined with the Christmas party—AND seemingly only getting half the amount of presents as those celebrating their birthday on any other day of the year!

While Max had always been happy with the amount of gifts he received on his birthday/Christmas Day, the possibility of receiving fewer than “the right amount” had been pointed out to him by classmate Jones. At the time, Max had replied with “Well … at least no one forgets my birthday!” But later he felt that his retort had been lame.

Sometime in the weeks leading up to December 1st, Max had struck on the thought that having two parties on Christmas Day would make sure he received the right number of presents!

“In the spirit of Christmas,” Max’s father was saying, interrupting Max’s reverie, “I will let the Millers have a fair advantage at this year’s Annual Snow Fort Building competition!” Everyone chuckled.

The “in the spirit of Christmas” proclamations had been a tradition that Mrs. Talley had begun three Christmases ago: each member of the family was meant to say one thing that he or she would do that Christmas season to show Christmas cheer to others. The Annual Snow Fort Building was very important to Mr. Talley—former snow fort building champion two years in a row—so Max and everyone else in the Talley family agreed that it was a spectacular bit of Christmas giving.

“In the spirit of Christmas, I will allow Max to use the computer in the afternoons for the rest of the month from four to five.” This was Sophie, Max’s older sister by three years.

“That is very benevolent of you, Sophie,” said Father, and Max rolled his eyes.

Noah was next in line, but at two years of age no one expected him to say anything—except for “yay,” which he said a lot.

Max seized the opportunity. “In the spirit of Christmas I’ve decided to plan my own birthday party. I know it’s a lot of trouble to celebrate my birthday along with the Christmas party, so the good thing is this year I’ll plan my own party, and then we can have two separate parties, but both on the same day.” Max didn’t wait around to hear what his mother, father, Sophie, or Noah had to say. He hastily excused himself, and then flew up the stairs to his room—he had a birthday party to plan!

This year everyone will need to give me a birthday present at my birthday party PLUS a Christmas present on Christmas morning. Fair is fair.

By the way, this is NOT Grandfather Reginald Talley the First, who recently passed away. This is Max. I wrote “Reginald’s Diary” on the cover since no one gets into Grandfather’s things. To be on the safe side, I am placing this diary in an empty cereal box and under the nearest pile of clothes. The real title should be something like “The Year Max Really Enjoys His Birthday” or “Operation: More Presents for Me.” But I don’t want to be obvious.

Authored by R. A. Watterson. Illustration by Yoko Matsuoka.
Copyright © 2011 by The Family International