My Wonder Studio
The Barbie Doll and the Action Figure
Friday, October 7, 2011

The aforementioned action figure landed solidly on LEGO creations that had once been tanks or houses, but which were now little piles of broken pieces.

“My, my! You are handsome, Action Figure,” chirped a high-pitched voice. Standing by watching the devastation was Barbie.

“Hey, doll,” said Action Figure, his voice deepening, which made Barbie wonder if Action Figure had taken a chill. “Did you see how I singlehandedly crushed the baddies?”

“I did,” Barbie responded with a look of wonder. “You were so strong, so brave, so…”

“Yeah, I know,” said Action Figure, cutting Barbie off. There was no trace of modesty in his voice. “Hey, would you like to … um…” Action Figure flexed his right arm, and puffed out his chest, which he was wont to do when he lost his train of thought.

“Yes?” asked Barbie, as she fluttered her eyelashes. As much as is possible when eyelashes are drawn on to your eyelids, thought Barbie. 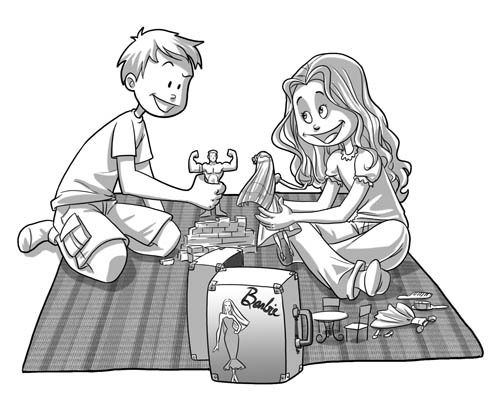 “I really think that your action figure can think of something better to do with Barbie,” said Janette with a roll of her eyes.

“Nah. Fighting villains is the ultimate cool,” replied Garrett as he continued playing with his action figure. “Besides, Barbie just wants Action to look at her and go all mushy.”

“Well, you have to admit that he is quite taken with my beautiful Barbie.”

Garrett grunted in response, and continued his manipulated devastation of the half-constructed LEGO town via Action Figure. He marveled at Action Figure’s strength and versatility. Action Figure always knew what to do and what to say, and he was strong and athletic. Of course Barbie liked Action Figure. It was a given, thought Garrett.

Meanwhile, Janette was having thoughts of her own. Action Figure really should do something else with Barbie, … anything other than vanquishing bad guys. Really. I mean, just look at Barbie! She’s so pretty, her hair is beautifully done, and that dress is gorgeous. Of course Action Figure likes Barbie. Of course he’d want to carry her books, or walk with her and hold her hand, or take her to a party … or something! It was a given! thought Janette.

That night, a shooting star lit up the night sky, and a girl wished that she could be as pretty as Barbie Doll, and a boy wished he could be as strong as Action Figure.

There was something familiar about the large hulking figure off in the distance. As the figure neared, the clothes gave him away. She’d recognize those camouflage fatigues anywhere. Action Figure! But he seemed to have trouble walking, and kept stumbling from side to side.

She quickly stood to approach him, but as she stood, she found it nearly impossible to stay steady on her heel-clad feet. “Action, Action!” she called.

He turned, and after a second, he recognized her, and shuffled toward her. “I’m heavy,” he panted in way of greeting. “I shouldn’t feel this heavy.”

“Garrett? Is that you?” asked the girl.

“Y-yes, I think so. Is that you, Janette?” asked Garrett.

“Yes!” cried Janette. “I think I’ve turned into Barbie. I made a silly wish last night. … It was barely more than a thought.”

Garrett nodded with understanding, but found he couldn’t move his head, since he had no neck to nod with. He settled on verbalizing his yes.

“I made a wish as well.” Garrett tried to work up some excitement as he looked down at his expanded chest and super-sized biceps. Well, take a look at me, I bet Janette will like me now! thought Garrett. He stole a glance at Janette from the corner of his eye. Maybe if he flexed his muscles or devastated something, Janette would pay attention to him.

“You see that box over there? I betcha I can crush it!” said Garrett with sudden inspiration.

“Huh…?” Janette was not following Garrett’s train of thought. She had just been thinking that she should probably be enjoying this wish fulfillment a little more. After all, she had wanted to look like Barbie and have Action Figure carry her books. But what was he saying about wanting to crush boxes?

Action hobbled over to where a number of wooden crates were stacked. He really didn’t seem able to balance well. His chest is three times the width of his lower body, thought Janette with concern.

Garrett tried to kick the box, but his legs were not built for that kind of action, and he fell in a heap on the floor. 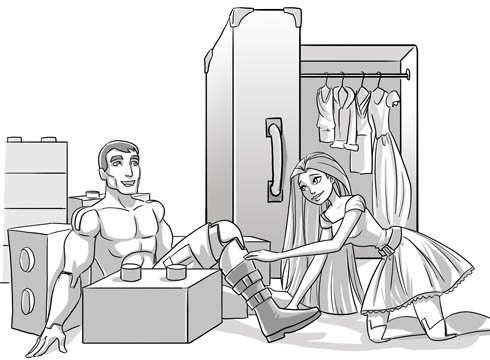 “Oh!” gasped Janette, as she hurried, or tried to hurry, over to Action Figure. But her feet were too tiny for walking on, and her legs were ridiculously long, which made it almost impossible to balance properly. She ended up crawling over to where Action Figure was sprawled on the floor.

“Are you hurt?” she asked Garrett, as she helped him sit up.

“N-no…,” said Garrett. He looked more embarrassed than hurt, and then happy for all the fuss that Janette was making over him. “I think I was just trying to get your attention,” he muttered.

“Oh … Garrett, th-that’s the nicest thing you have ever said to me.”

“Really?” asked Garrett, intrigued. He felt sure that he had said plenty of nice things to Janette. After all, wasn’t he always trying to get her attention? Look at all the buildings and bad guys that Action Figure had devastated for her sake! “B-but I thought that you only liked Action Figure because he had muscles, and fought bad guys and stuff.” 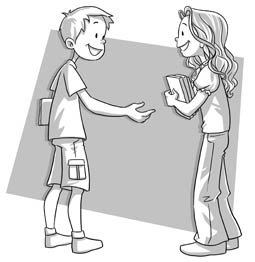 Garrett grinned. “This is pretty ridiculous, huh?” Janette is so smart and kind. She never makes me feel awkward. I think that’s what I like best about her.

When dawn broke the next morning, a little girl and a little boy wished to return to their normal selves.

“May I carry your books, Janette?”

Janette turned and saw a boy with brownish-black hair, and care and friendship in his eyes.

Moral: Trying to be someone you’re not, in physical appearance or in other ways, will not win you true friends. Real friends will like you for who you are rather than for what you look like.

Authored by Yoko Matsuoka. Illustrations by Sabine Rich.
Copyright © 2011 by The Family International