Summer had finally arrived, and Kimberly and her friends were going on a camping trip. All the children were looking forward to camping in log cabins, marshmallow roasting, and canoeing along the calm narrow river.

Although the bus ride to the campsite was uneventful, three of the loudest students were huddled together for most of the trip, laughing and whispering among themselves. They seemed to be plotting something for this camping trip. Kimberly was quiet and studious, and so she ignored the whisperings and kept to herself throughout the drive. 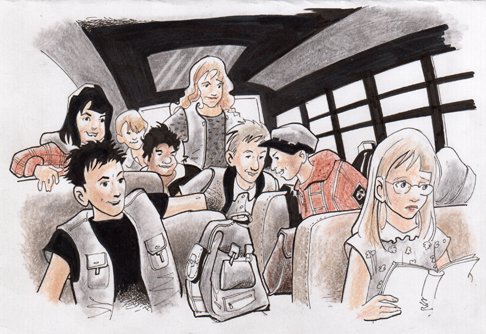 In the past, Kimberly had been the object of practical and unkind jokes. She would often attempt to brush them off, believing—hoping—that as long as she tried to be agreeable, her classmates would begin to like her, talk with her, and include her. Her family life did not facilitate her making new friends: she was the eldest of a rather large family, and because her father was away on frequent business trips, she was often expected to help with her younger siblings. Her classmates, however, had no idea of the responsibility she had to take on at such a young age.

After arriving at the campsite and unloading bags into various cabins, everyone gathered firewood from the surrounding wooded area. The class built a large bonfire where they roasted hot dogs. Later in the evening they told jokes, spooky stories, and toward the end, riddles. 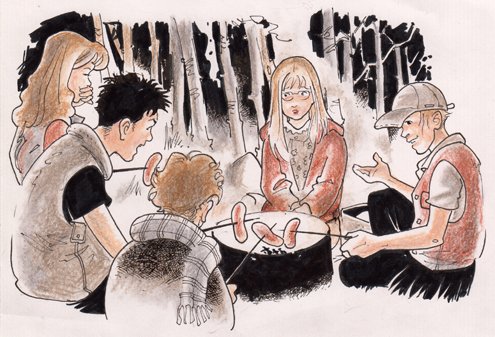 “What has four eyes, no friends, and reads all day?” inquired one child.

Everyone paused to see how Kimberly would react.

“Oh, did you ask me a question?” asked Kimberly, after noticing everyone’s stares. Everyone laughed as they realized she had not been listening.

Kimberly stood, mumbled something about being tired, and ran to her cabin.

The next day was sunny with a light, pleasant breeze. After lunch, a couple of the boys, led by Ted, approached Kimberly, who had been avoiding the rest of the group all morning and was now sitting at a wooden picnic table at the edge of the camp clearing.

Kimberly secretly liked Ted. They lived on the same street and would sometimes walk together on their way home after school. When he was apart from his other friends, Ted was quite nice to her, though he would never talk to her in front of his classmates.

“Oh, it’s all right,” said Kimberly, surprised and touched that Ted apologized for what wasn’t his fault.

Ted then pulled a small flower out from behind his back and shoved it toward her. She reached for the stem of the flower and Ted turned and walked away. Kimberly wondered why he'd left so abruptly; she also noticed some other boys, standing at a distance, doubled over with laughter. Then she looked down. The flower stem had been broken, causing the head of the flower to hang limply. With tears in her eyes, Kimberly ran into the forested area to be alone. 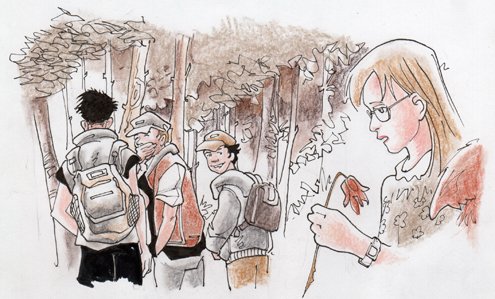 Kimberly stayed in the woods for over an hour, and she wondered if she would be missed. But when she returned, she found an empty camp, and the cook on the camp staff told her that a game of capture the flag was in progress in the woods. Following the general direction the cook had pointed, she set out to find the rest of the group, and resolved not to get down about Ted or the ridicule from the others.

“Look who caught up with us!” complained one of the boys.

Kimberly blushed, but she was determined to join in and try to have fun.

A little time passed, and she realized the boys seemed lost, though they weren’t admitting it. Kimberly looked around her; she had no idea which direction she'd come from either. The sun was setting and the air was getting cooler.

The boys were climbing over rocks and through bushes in the direction that they thought they had heard some voices. Kimberly did her best to keep up with them. 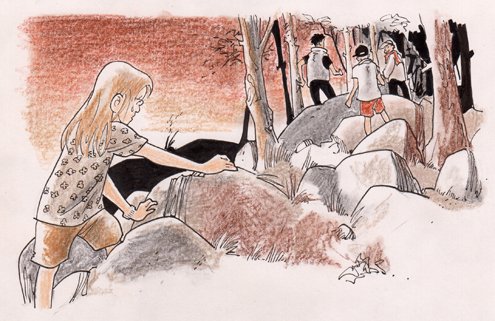 The boys finally heard their teacher and some other classmates calling their names from a distance, and they headed in that direction. They had crossed a narrow river and now had to return to the other side. There was a particularly large boulder that connected with several others, which would take them across, but Kimberly hesitated at the foot of the boulder.

“What has four eyes, no friends, reads all day, and can't climb?” jeered one of the boys. The other boys chuckled and Ted did as well, though he mumbled to Kimberly that she could climb it if she really tried. But Kimberly stumbled through the bushes to the right, saying she'd find another way across just a little further down.

After crossing, Ted asked his friends to walk slower so Kimberly could catch up with them. But Kimberly didn't appear. Ted stopped. Was she still looking for a way across? Ted decided to wait while the others went ahead to join the rest of the class. Ten minutes passed. Still no sign of Kimberly. The crickets were starting to call to each other.

Ted heard noises in the bushes behind him and their teacher came through, looking concerned. The others had told her what Kimberly had said about finding another way across the river, and she had come to find Kimberly. They stumbled through the bushes and down to the river, where, to their surprise, just fifteen meters away from where the boys had crossed was a small waterfall, and the ground dropped away on either side. 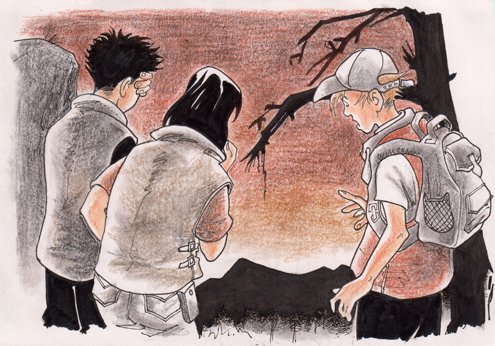 The teacher and Ted crossed the river again to look around and caught sight of a broken branch leaning over the drop. Ted ran to the edge and looked over. There, ten feet below, them, close to where the waterfall pooled, Kimberly lay motionless beside a large rock.

They scrambled down. She had blood on her head. She must have still been running when she came to the drop and fell straight down, hitting the rock. The teacher touched her arm and called her name, and Kimberley moaned faintly.

A rescue team was called in, which took Kimberly to the nearest hospital and the class returned home from their field trip a day early, sober and quiet. Poor Kimberly lay in a coma for two days before opening her eyes and asking where her mother was.

Wishing to make amends, Ted went to the hospital where Kimberly was staying. Although Kimberly was not yet receiving visitors, he was surprised to find a few of his friends who had also teased her, in the waiting room as well. Presently, a tired-looking woman entered—it was Kimberly’s mother.

She said little, except to explain that she'd found a flower pressed between a piece of paper in Kimberly's pocket from the day of her accident.

She pressed it into Ted’s hand. He opened it to see a purple and yellow flower and scrawled on the paper was the words “from Ted.” On the back of the paper was a handwritten poem.

Dear Lord, when others make me sad,
Thank You for making me glad.
Thank You for flowers and grass and trees,
For the birds that sing, and for the bees.
Help me, dear Lord,
To find a friend,
My broken heart, dear Lord, please mend.

Feeling terrible, but wiser, Ted looked up at Kimberley's mother. The woman looked pale and tired, but, there was kindness, despite the pain in her eyes, as she thanked Ted for being a friend to Kimberly, and for the times he’d walked home from school with her.

It took a couple of weeks for Kimberly to be well enough to leave the hospital, but it took many more weeks for the school and much longer for those of us involved to recover from the shock of such a close call. As a result of the accident, Kimberly was confined to a wheelchair and had to undergo rehabilitation for a long time afterward.

I still wince, thinking on that evening so many years ago. You see, I'm Ted.

From that day on, I changed. I know that if just one of us—if I—had had the courage to say one sincere word of kindness that day, if we had helped her across those large rocks, the accident would never have happened. It was the beginning of a new life of kindness for me and for many of my friends.

Kimberly and I became good friends—as we should have been right from the start if I had not allowed unkindness to get in the way. 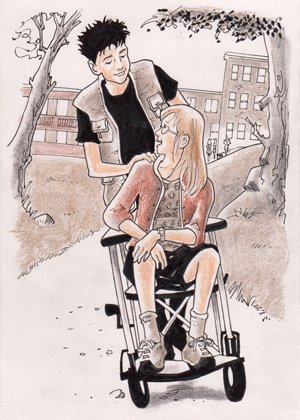 Author unknown. Illustrations by Jeremy.
Copyright © 2013 by The Family International