“I don’t like math homework!” Frank exclaimed as he shut his math book with a frustrated thump. It had been a difficult Saturday morning for Frank. With a few minutes to himself before lunch, Frank flopped on his bed and wallowed in his misery. He started to drift off to sleep. …“Yeah, that’s him!” an ugly voice snarled behind him. 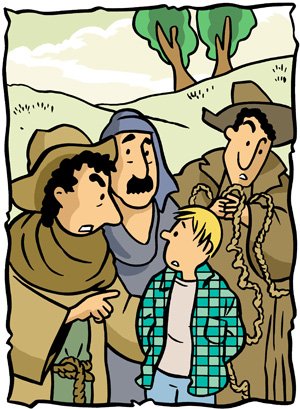 Suddenly, Frank found himself being set upon by three peculiar men dressed in the oddest clothing he had ever seen. It was as though the cloth had been snipped up and tacked together without any thought at all given to measuring the cloth and making sure it fit together properly.

“What’s going on? Who are you?” Frank asked.

But the men didn’t answer. Instead they grabbed Frank roughly and proceeded to tie his hands.

“Get your hands off of me!” Frank protested, and struggled to fight back as best he could—but to no avail. His hands were soon tied behind his back with what Frank thought was the longest, most ridiculous piece of rope he had ever seen.

“Where am I? What’s going on?” he again demanded of his captors.

“We are taking you to Nonumbersville, where you’ll be taught a lesson. How dare you come to our land with all your fancy numbers!”

“What numbers?” Frank asked, but he received no reply. He finally decided to submit to his captors, at least for the moment. Frank was roughly pushed and jostled down a dusty path in the direction of what appeared to be a small village.

What an odd place! Frank thought. The road itself was wide in some parts and narrow in other parts with no rhyme or reason—as though whoever had made it had no sense at all. Due to unnecessary twists and turns, the road seemed twice as long as needed to get to where they were going.

As they neared the village, he saw along the side of the road a very tall post with a small, poorly shaped sign near the top. Frank could barely read it because it was situated so high up the post. 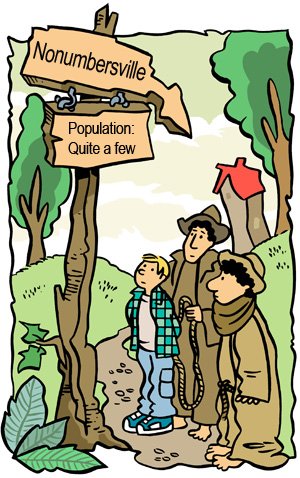 “Nonumbersville,” the sign read. “Population: quite a few. Beware! Individuals caught using numbers in proximity to our city will be prosecuted to the full extent of the law.”

“We’ll see how crazy it is when the judge is done with you,” snapped the smallest of the three men. “We have enough evidence on you to put you away under lock and key!”

Frank noticed his captors were without shoes. A piece of badly cut rope held up their trousers. One thing was becoming clear to Frank—they seemed to avoid numbers in all aspects of their lives.

A funny look of mischief came over Frank’s face. What would happen if he started to count his steps into town out loud? However, after considering the general temperament of his guards, he decided against it.

Nonumbersville was every bit a no-numbers kind of place. It was as though a tape measure had never touched a single item in the town. Nothing was properly measured or straight, causing the roofing to fit as if it were about to fall off. Frank could not imagine a more lamely built row of houses. Walls weren’t straight, the doors did not fit, and as for windows … well, for the most part there were none. Nothing seemed even or uniform. 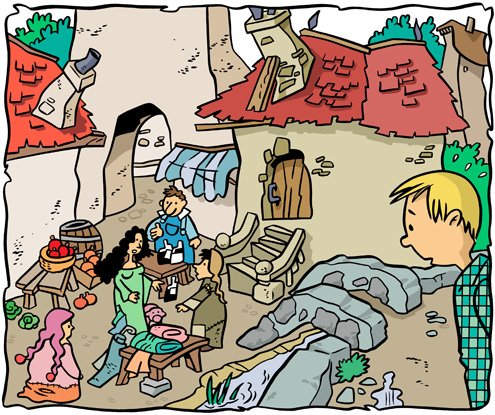 Frank was pushed along through the marketplace that was like nothing he had ever seen. There were no prices posted, no money being exchanged, and no counting going on of any kind. There was just a strange and very arbitrary exchange of odd items taking place. There was no discernible pattern to anything that was happening. There were no rows of stalls like the markets that Frank was accustomed to. This market was total confusion.

Leaving the market, Frank saw what he supposed was a school—for that was the label of the place someone had scribbled on a somewhat flat surface. The students had no regular books; they were an array of sizes and shapes. And of course there were no page numbers within the books. And since clocks and calendars and any measurement of time seemed entirely banned in Nonumbersville, the school seemed deserted, as likely many of the students didn’t know when classes would be held, and those who did show up learned very little anyway.

At last they came to a particularly ugly hovel where several people sat outside waiting. Frank was ordered to “sit here and wait”!

“The magistrate, of course!” was the reply.

“What time will he come?” Frank asked, to which he received a sharp slap across the face.

“That will be enough of your numeric insolence and heresy. We won’t stand for any ‘time talk’ here.” 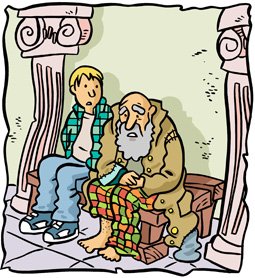 Dejected and confused, Frank sat down by an aged man waiting on the bench. At last he got enough courage to speak to him. “When will the magistrate be here?"

Frank sat quiet for a long time, until he could bear it no longer and ventured another question. “Will the magistrate come in today?”

“No one knows when he will come, because ‘when’ is a measurement of time which is not permitted here,” the old man whispered back.

The afternoon wore on. Then suddenly everyone around Frank stood up. The magistrate had arrived. A most oddly dressed old man was making his way to the hearing house. It seemed that word of Frank’s arrival had reached this obviously important man who otherwise might never have come by the hearing house.

“Stand up, you rebel!” one of the men shouted at Frank. “Now you’re going to get what’s coming to you!” Frank was rudely shoved toward the door—if you could call it that. He stumbled into the courtroom along with the other “number” criminals.

Frank was not the “first” to be tried, but sat in shock as each appeared before the magistrate for his or her hearing and punishment. The old man beside him was randomly whacked on the bottom for his crime of having been heard counting in his sleep. 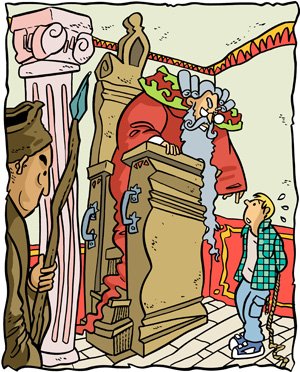 At last it was Frank’s turn to be tried. The charges against him were read in the gravest of tones. He was charged with attempting to corrupt the population with his heretical doctrines of digits!—An offense punishable with a prison sentence for an “undetermined period.” Of course, to place a fixed amount of time for his prison sentence would be entirely wrong. Besides, no one in town seemed to even know what day of the month it was, much less what time it was, since, as was mentioned previously, they had no clocks and kept no calendars.

Frank defended himself well, delivering an impassioned account of how much he hated math and anything to do with numbers. But it was all in vain. His defense was cut to shreds when the chief prosecutor forced Frank to show the magistrate that his shirt label had an actual size printed on it. Frank was found guilty as charged.

A trembling, shaken Frank stood to hear his sentence. It was as he had feared—prison for an undetermined period! As Frank was being led away, the magistrate shouted out to the guards: “Get rid of those horrid tailor-made clothes and shoes immediately. They are a reproach to this court!”

Poor Frank was set upon again! This time his assailants were attempting to rip his clothing off. His shirt was the first to go, and was promptly torn to shreds by the gathering crowd of angry onlookers determined to have a hand in the punishment of this vile criminal. But when they went for his pants,

Dazed but still kicking and flailing his arms about, Frank woke up to find himself back in his room.
“I’m back! It was all a bad dream!” he shouted with joy.

Frank reached over and picked up his discarded math book. “Okay,” he said, “I get the point. Maybe math is not so bad after all!”

Authored by Paul Williams. Illustrations by Didier Martin.
Copyright 2012 by The Family International.