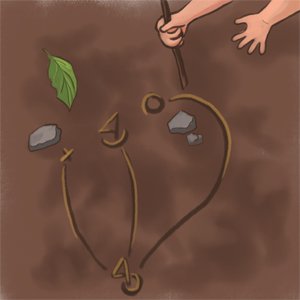 Group Moki huddled around a tall pine providing shade from the high summer sun. Their team’s red flag hung limply from a pole fifty yards away.

“We need decoys to go out here and here so that Lucas can sneak around the back and make a go for their flag.” Captain AJ was etching their strategy onto the ground with a stick. “Max, you can be one of the decoys.”

“What? But I’m so good at being sneaky!” shouted Max. Startled birds flew out of the tree, a few insects scrambled away, and Max continued in a quieter voice. “Like in Escape from Planet Mari-Toe, there are all these aliens and swamp monsters and creepy crawlers, but I’ve only lost one toe so far! That’s super good. That’s a record! I could tell you about the time I turned into a fly so no one would guess I was actually a space captain! I can’t be a … a … decoy!” 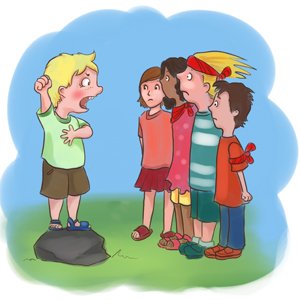 AJ looked up from where he was crouching over Group Moki’s strategy, and then he looked around at his classmates who were all waiting for the game to begin. “Fine. I’ll be the decoy. You and Clarence stay here and guard the flag.”

Before Max could raise another protest a shrill whistle sounded and the game commenced. Max looked around at his dispersing classmates. They all had Group Moki’s signature color, red, tied onto their arm, or around their heads. He’d never seen them this focused before. So, okay, the winning group would get the Capture the Flag trophy to display in their classroom for the rest of the year, and extra-extra-large marshmallows at campfire tonight, and a little badge for each member of the winning team, and boasting rights till next year’s summer camp. But really, it wasn’t that big a deal. Max trudged over to where he was supposed to stand and guard the flag.

You know, if AJ would listen to me, he’d know I’m really good at this sort of thing. And why did he have to go and pick Lucas of all people. Max’s eyes narrowed. AJ is supposed to be MY best friend. Why, if we were on Planet Mari-Toe, I wouldn’t forget about my friends like AJ is…

The day before, Group Moki had gone fishing in Lake Hottamo. For some reason AJ had spent most of the time catching fish with Lucas because Lucas had “better fishing strategy.” Max had good fishing strategy too. Of course, it involved some Wii fishing moves he had learned, and it wasn’t his fault Lake Hottamo fish didn’t recognize good moves when they saw them. For some reason this camping trip wasn’t turning out as he had hoped. And it definitely wasn’t as fun as he had remembered last year’s camp to be. He wished AJ would listen to his ideas. But most of all, he missed playing and talking with his best friend.…

Max’s eyes were trained on AJ, who was now stepping into the little stream that was the boundary line between Group Mokian land and Group Akelian land. Off to the side, a bush moved and rustled, then went still. Max went on full alert. It was an Akelian trying to catch AJ. 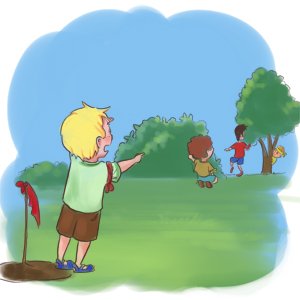 A yellow-banded Akelian leapt out of the bushes, making a run to capture AJ, but AJ had gotten a head start from Max’s warning and sprinted across the border not a moment too soon.

Max exhaled. AJ turned and waved at Max. Max grinned. Why, he hadn’t known he had super eagle eyes! As AJ headed out again, Max paid closer attention to the bushes and the trees surrounding the flag and the boundary line. And there was another Akelian! He raised the alert, and his land was safe. Over the next hour Max warned his fellow Mokians of intruders on their land and he and fellow flag guard Clarence successfully guarded their flag from Akelians.

A whistle sounded. The game was over. Lucas had snatched the Akelian flag and made it over safely onto Mokian land.

The Mokians let out cheers and cries of “hurrah!” Max was happy. He knew he had helped too, even without any of the superpowers he would have had if had been on Planet Mari-Toe. Nope. His super-eagle-eye-power was all his own.

“Hey, Max. You did great at guarding the flag.”

Max and AJ grinned and clapped each other on the back and went to shake the hands of the Akelians who had gathered around as well.

“Good game, Akelians and Mokians,” Mr. Cook was saying into a megaphone. “I’m glad you had fun. And now I’m sorry to deliver bad news. However, it seems our camp food storage had a nest of fire ants hidden in one of the corners. If you remember, these are not gentle ants, but can give a nasty sting. We’ve been working on getting an exterminator out here, but right now our options have come to relocating farther into the forest, or ending summer camp today.”

Max groaned. He was just beginning to have fun, and he wasn’t ready for it to end!

“We’ll be putting it to a vote,” said Mr. Cook. “It’s going to be a two-hour ride to the next camp site, and then we’d need to set up our tents again. It’s going to be extra work for everyone if we relocate. But it does mean that we can have three more days of fun. So, raise your hand if you’d like to relocate, and keep your hand down if you’re ready to go home.”

“All right then,” said Mr. Cook, “on to the next camp site! While you were playing, the camp staff packed most of your belongings and loaded them into the bus, so we’ll be going straight to the buses from here.”

“I thought you might want to go home,” said AJ to Max as they walked to the waiting buses at the camp site.

“Because then you’d get to play Escape from Planet Mari-Toe,” said AJ, “and sometimes you stare off into space and play the game inside your head.”

Max blushed. “No. I can play that at home anytime.” 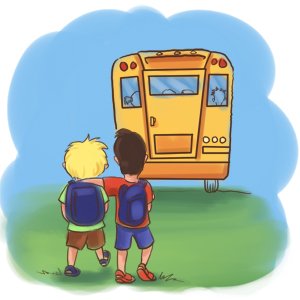 “Maybe on our bus ride you can tell me about how to play Escape from Planet Mari-Toe.”

“I think you should tell me everything I missed from all that stuff on camping I didn’t read,” said Max.

Max left all thoughts of Escape from Planet Mari-Toe behind as he and AJ laughed and climbed aboard the bus that would take them to more summer camp adventure. Planet Mari-Toe can wait, thought Max.

P.S. Just found out that Lucas also has Escape from Planet Mari-Toe, and he thinks I look like Peon Pettytrot. We’ve decided to be friends.

Authored by R. A. Watterson. Illustrations by Yoko Matsuoka.
Copyright © 2012 by The Family International