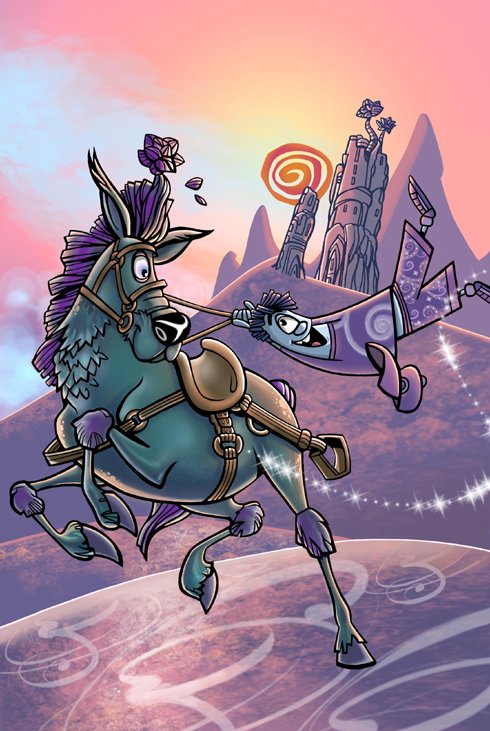 “Ahh, I see a bright future for Nog!” King Bloggish exclaimed while looking over his land from the castle balcony. “I enjoy watching the children study and learn. Each student is gaining knowledge and talents that will help make them fine, productive citizens of our land, and it is my wish that one day they will take Nog to new heights of success.” 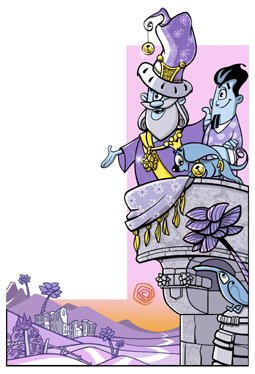 King Bloggish and Toshgi were watching a small group of schoolchildren taking part in their morning classes, sitting at desks in the shade of a large tree. You see, in the land of Nog, school was always held outdoors. The pleasant climate of Nog, and the fact that rain only fell during the night, made this possible. Noggians believed that fresh air enhanced the learning capabilities of the children.

“The future of Nog belongs to you,” said Miss Appsel the Instructress, “because you will grow to be the future citizens and leaders of our beautiful land one day.

“To help prepare for the future, King Bloggish requires that we, your teachers, encourage each of you to learn a new skill outside of your regular schooling that will be an asset in your adult lives. As King Bloggish so aptly put it, ‘Every skill one masters today becomes a solid stone in the house of fulfillment for the future.’”

“King Bloggish simply means that each time you master a new skill in your life, you acquire a talent which will help you have a meaningful life and bring you fulfillment.

“This is a listing of the skills I have mastered so far.” Miss Appsel drew a stack of ten purple stones on a whiteboard. On four of the ten stones she wrote a skill: “teaching,” “baking pastries and catering,” “dressmaking,” and “long-distance running.”

“And there are many more skills I want to gain,” she said as she pointed to the blank stones.

“This year I’m taking up mountain climbing. I’ve already started my training to climb Mount Violet, the highest mountain in Nog. Each of these skills is a part of my house of fulfillment.”

“Once we’ve gained a new skill,” said Merchy, a boy sitting behind Tinshi, “we can enjoy using it for the rest of our lives.”

“And we can improve upon these skills while adding new ones in the future,” said Manch, a tall, slender boy.

“In eight months King Bloggish will hold the Skills Exhibition with children attending from all over Nog to display their newly acquired skills.”

“It takes time to acquire new skills. You will be surprised at how quickly eight months pass.”

That weekend Tinshi, Nansel, Merchy, and Manch discussed with their parents what to concentrate on learning over the next eight months in preparation for the Skills Exhibition.

“Your Uncle Bershag the Accomplished is a fine cabinetmaker,” said Merchy’s mother after he explained to his parents his wish to learn to build shelves and cabinets.

“I thought he was a painter,” said Merchy.

“That’s just one of his many skills. I’m sure he’d enjoy training you.”

“And what would you like Bershag to teach you to make?” asked Merchy’s father.

“I would like to make shelves for Mother so that she can display her fine pottery,” Merchy said.

“I’d like to learn embroidery, Mother,” Nansel told her mother. “Then I could embroider beautiful works to give to others as presents.”

“Though I enjoy handcrafts such as crocheting and macramé, I’ve never gained the skill of embroidery,” said Nansel’s mother. “We would enjoy having some of your embroidered works to display in our home.”

“I can’t wait to find out who can teach me!” said Nansel excitedly.

“And what skill do you have in mind, Manch?” his father asked.

“You are bright and capable,” said Manch’s father, as he put his arm around Manch’s shoulder. “I’m sure you’ll do well. Let’s take a walk around town and see some of the variety of services that are provided. Maybe a particular skill will spark your interest.”

As they walked down one street, Manch and his father stopped to talk with Oscat the Mechanic, while he did repair work on a carriage. Later Manch asked his father, “Do you think I could learn to drive a carriage?”

“It’s not common for someone as young as you, but I don’t see why not. Are you aware that carriage drivers who communicate well with their cootang* that pull the carriage are the ones who offer the smoothest rides?” (*A cootang is an animal on Nog that is much like a horse with purple hair and only one eye.)

Manch looked glum. “But I’ve never learned to communicate with a cootang, so I guess I can’t learn to be a carriage driver.”

Manch’s dad smiled at his son, “I’m sure we can find someone who can teach you both carriage driving and how to communicate well with the cootang team.”

“Father, what should I learn?” Tinshi asked, looking to her father for advice.

“You have always shown potential to be a fine scurry-ball* player, Tinshi,” said her father. “Perhaps you’d like to join a team.”

(*scurry ball: A game played in Nog that is much like our game of soccer.)

“There’s a scurry-ball tournament held each year at the exhibition,” said Tinshi.

“That’s right, Tinshi,” said Father. “If you’re faithful with your practice, you’ll be prepared to display your talents with finesse at the exhibition tournament.”

The months and seasons passed while the four students studied hard in school to gain the scholastic knowledge they needed. And after school and on weekends they were faithful to invest time in order to gain proficiency in their new skills.

“Mr. Canch the Carriage Driver asked me why he hasn’t seen you the past couple of weekends,” said Manch’s father.

“I thought you wanted to learn to drive a carriage.”

“But Mr. Canch only lets me drive when he is also holding a second set of reins,” said Manch. “He told me I’m doing well with handling the team, but he doesn’t act like it.”

“Manch, I’m sure Mr. Canch has good reasons for this. Have you talked with him about it?”

“He said he’s there to help if anything goes wrong. But he’s already taught me all I need to know about how to handle the cootang and drive a carriage. After all, I’ve been practicing with him for five months. I think he just doesn’t trust me.”

“If I was Mr. Canch, I would have trouble trusting a driver who doesn’t show up for further training and practice,” said Manch’s father. 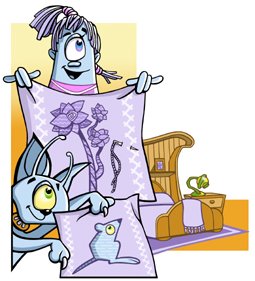 “Look, Mother!” exclaimed Nansel proudly. “I’ve finished a pillow cover.” Nansel was excited about the embroidered picture she had created of a purple sap tree in full bloom.

“It is beautiful against your violet bedspread,” said Mother. “Have you chosen what to create for the exhibit?”

“I don’t think I’ll do anything else. I can display this embroidered pillow cover,” said Nansel. “It’s good enough.”

“Yes, it is beautiful,” said Father, who had just walked into Nansel’s room. “But maybe you’d enjoy tackling a more difficult design and expanding your new talent.”

“You still have three more months,” said Mother. “I’m sure with further practice you can prepare an even grander exhibit that you will find more fulfilling to present.”

“Great game,” said Tinshi’s father. “You handled the ball well. Coach Sphere said you are a fine scurry-ball player, and he’s happy to have you on the team.”

“Can you talk to Miss Appsel for me, please, Father?” asked Tinshi. “She said I haven’t given enough attention to the history and math lessons that she assigns for homework. But I don’t have time to do homework! I need to perfect my scurry-ball skills.”

“Tinshi, though it’s important to perfect your skills at scurry ball, it’s also important to be strong in your knowledge of history and skillful with math. It’s a matter of keeping a good balance in your priorities,” said Father.

“Merchy, my pottery looks beautiful on the shelves you built,” said his mother. “Thank you.”

"I think my shelves will be the finest displayed at the exhibition!” said Merchy proudly.

“They are fine shelves, Merchy,” said his father. “But whether they will be the finest displayed at the fair or not, I won’t be disappointed in you. I’m proud of you for applying yourself and gaining this useful new skill.”

“It’s one of my favorite days of the year,” said King Bloggish to Toshgi.

“Let’s hurry, I want to visit every display and encourage all of our brilliant students. 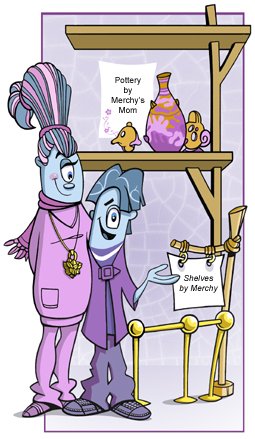 "Such beautiful shelves! And who is the creator of this fine piece of work?” asked King Bloggish.

“I would like for you to meet our son, Merchy,” said his mother.

“It is an honor, Sire,” said Merchy, as he bowed to the king.

“And why the troubled face?” King Bloggish asked.

“My shelves were graded as second-level shelves.”

“But, my son, being in the humble position of second level is not a bad place to be,” said King Bloggish. “You have proven yourself capable of working with wood. And I challenge you to perfect that skill, and make an entry again in next year’s Skills Exhibition. Your work shows promise, and you will likely not only learn to build first-level shelves, but even learn to build a first-level cabinet one day.”

"My! What a beautifully embroidered sunset,” said King Bloggish. “And what is your name, my dear?”

“Nansel, Your Majesty,” answered Nansel, as she greeted the king with a curtsy.

“Nansel, would you be kind enough to allow me to hang your lovely work in my bedroom? Upon retiring at night, I would love to gaze upon this sunset as I thank our Creator for the marvelous blessings He gave us that day.”

I’m so glad I worked hard and didn’t stop with my first creation, Nansel thought.

“Sire,” said Toshgi, “it’s nearly time for the final game of the scurry-ball tournament. I have the royal carriage here to take you.”

“Toshgi, not the royal carriage!” exclaimed King Bloggish. “I understand that there is an eight-year-old student who learned to drive a carriage this year.  I want him to take me. We’ve never had one of our students learn how to handle the cootang at such a young age. I’m impressed.”

“At your service, Your Majesty,” said Manch, as he bowed to the king, and then proceeded to open the carriage door.

“Young man. I want to ride up front with you,” said King Bloggish.

And Manch humbly clucked to the lead cootang to begin the journey, beaming a smile of thankfulness to Mr. Conch the Carriage Driver for training him so well.

“My fellow citizens of Nog,” said King Bloggish to the crowd of Noggians gathered for the game, “before the game begins, I wish to applaud our students for their marvelous accomplishments.”

Shouts of “Hooray!” “Good job!” “Bravo!” went up, while the crowd whistled and clapped for the nearly-3000 students standing in the center of the arena.

“And now let us enjoy the final game of the scurry-ball tournament!” 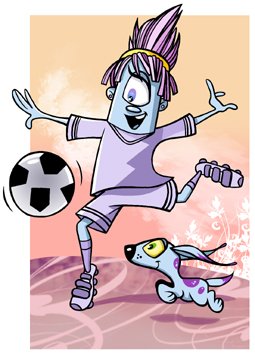 “And I’d like for you to introduce me to the fine young lady who maneuvered the ball so adeptly,” King Bloggish said to the coach of the winning team.

"King Bloggish, I would like for you to meet Tinshi,” said Coach Sphere.

“If you excel as well with your scholastic studies as you have with the game of scurry, then you have a bright future” said King Bloggish.

Tinshi beamed. “I was top of my class in math and history, Sir.” And thanks to Miss Appsel, Mother, and Father for seeing to it that I did my homework.

“Toshgi, please join me in a prayer of thanksgiving,” said King Bloggish that evening at the castle, as he looked out over his land with tear-filled eyes. “I’m so very thankful for the marvelous prospects of the future of Nog.”